Tony Enifer was living every schoolboys dream when he played football with his West Ham icons as a teenager. 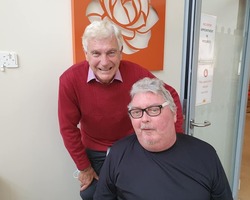 And he got the chance to reminisce with his hero, former England international and West Ham legend, Sir Trevor Brooking, when he popped in to see him at Saint Francis Hospice.

Sir Trevor, who is one of the charity’s patrons, spent more than an hour chatting and sharing stories with Tony who has a brain tumour and is being cared for on the ward. 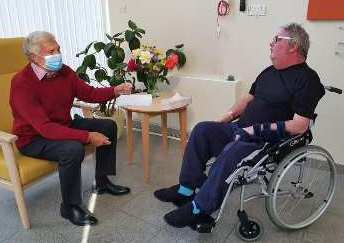 “Meeting Trevor was one of those magic moments in life you will always remember,” said Tony, 54, from Dagenham.

“I was a goalkeeper with the West Ham youth team and we used to muck in with the first team.

“I was there at the same time as Sir Trevor Brooking and I met him many times. He was a wonderful man and he was a magnificent footballer.

“Trevor was such an elegant player. It seemed like he had all the time in the world but he was as hard as nails and you could not push him off the ball.

“I remember making one save from him. He kicked the ball and I was able to push it over the bar with one hand. I felt as if my arm was going to come out of the socket.

“My mum loved him. He was such a model of what my mum wanted me to be - he was uber polite.

“I did not grow tall so that put paid to me being a goalkeeper - but what an amazing time I had hanging out with heroes such as Trevor Brooking, Jonny Lyle, and Phil Parks.”

While the door to a professional football career closed, another door opened and Tony has been pursuing his passion for music ever since.

“I’ve had such a lucky life,” says Tony, who joined the band The Originals as a bass player in 1993 and later formed the band International Rescue, which has been the resident band at The Lamb pub in Market Place, Romford for many years.

“There is nothing better than playing live, standing up before a crowd, and showing off.

“I was never naturally a singer but once I got the bug for it, I just wanted to sing, sing!

“My guilty pleasure is Robbie Williams. Everyone has got a song in them. You have to have the right song that you really connect with.

“It was a big thing being able to sing and play and I was really proud of myself. I was able to take it to another level.” 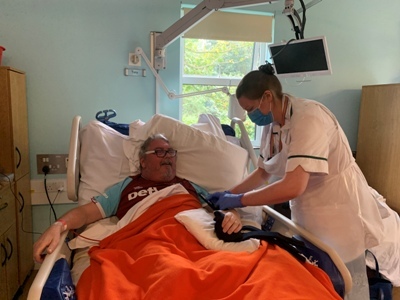 Tony’s illness means he can’t use his left hand so he is unable to play the bass but he is still able to enjoy music and hopes to go and listen to the band play live.

While at the Hospice, he has also been cared for by the occupational therapy team who have been helping Tony with daily stretches and exercises to improve his mobility as well as making sure he has the equipment he needs so he can be as independent as possible.

“I’ve had some falls and I can’t get up. I’m unsteady on my feet and that makes me very vulnerable,” said Tony.

“My poor dad is 81 and coming here has also given him a rest - I feel so much calmer knowing I don’t have to worry about him.
“I was apprehensive about the Hospice but my view has changed 360 degrees.

“The level of support they offer is much wider than I could have dreamed. It is more than just treatment for whatever illness you have.

“I keep getting told off for not ringing my call button enough. I have so many people looking after me and that has given me a boost.”