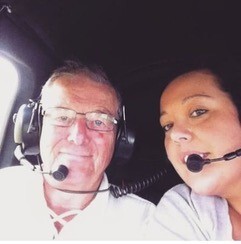 This Summer Laura Butler will be hiking across three of Yorkshire’s highest peaks, covering 24 miles and climbing up to 5,000 feet in just one day.

Laura is taking on the Yorkshire Three Peaks challenge on Saturday 14 August to raise money for Saint Francis Hospice and it promises to be an unforgettable adventure as she treks across rocky terrain, climbs thousands of steps and passes the famous Ribblehead Viaduct along the way.

“I have always wanted to run the London Marathon but I have accepted running isn’t for me,” said Laura.

“I have tried to complete the Couch to 5k so many times and always given up. I run a business and have a family so finding the time to train is difficult.

“So when I saw the Three Peaks Challenge, I thought this was something exciting I could do for the Hospice.”

In memory of Denis

Laura’s dad Denis was only under the care of the charity for a few days before he died in July 2020 but the love and care Denis, his wife Julie and Laura received made a huge difference to the family.

Denis, who lived in Romford, became poorly over Christmas in 2019 with a chest infection.

He had recovered from lung cancer many years earlier and had a lung removed but after several stays in hospital, a scan revealed Denis had a shadow on his lung.

Denis caught Covid-19 while in hospital and despite overcoming the virus, his health continued to decline in and late July, his devastated wife and daughter Laura were told he had just a week to live.

Supported by the Hospice

“We were referred to Saint Francis Hospice and Julie was the first lady from the Hospice at Home team to arrive at our family home,” said Laura.

“She was just unbelievable. She was only with us for two days and she made us all feel so safe.

“We had so much trust in her. We had never been in this situation before and she helped us to understand what was happening with Dad and what to expect.

“She even stayed with us after her shift ended because she didn’t want to leave us on our own - I think that is just amazing.

“Andy, the lady who took over from her was just as great. She was only with us for a few hours as my dad died that night. Once again she stayed over her time to help dress Dad, help with the paperwork and wait till the funeral directors arrived.

“These ladies may have had kids waiting for them, be a wife or have had plans, but they made us their priority.

“What they did for my dad and our family, means so much to us.

“Climbing three peaks in Yorkshire is the least I can do to support the Hospice for all that they have done for our family.

“My Dad’s motto was, ‘never give up’ and that’s going to keep me going through this trek when it gets tough and my legs and feet get sore.”

Laura’s had some great support so far from the local community in Southend where she lives.

She is being sponsored by her local yoga studio Chai - The Yoga Factory in Southend which also runs a coffee shop. They will be helping Laura fuel up for the challenge by sending her off with all the food she needs for her walk!

If you are inspired by Laura's story, and would like to join her on Saturday 14 August as she takes on the Yorkshire Three Peaks Challenge, then click here to sign up.