Sir Trevor Brooking to give Hammers fans a much-needed cheer

Sir Trevor enjoys many traditions in the Brooking household at Christmastime. He also has an all-year-round tradition of helping those who are less fortunate than him — including people living with life-limiting illnesses at Saint Francis Hospice. 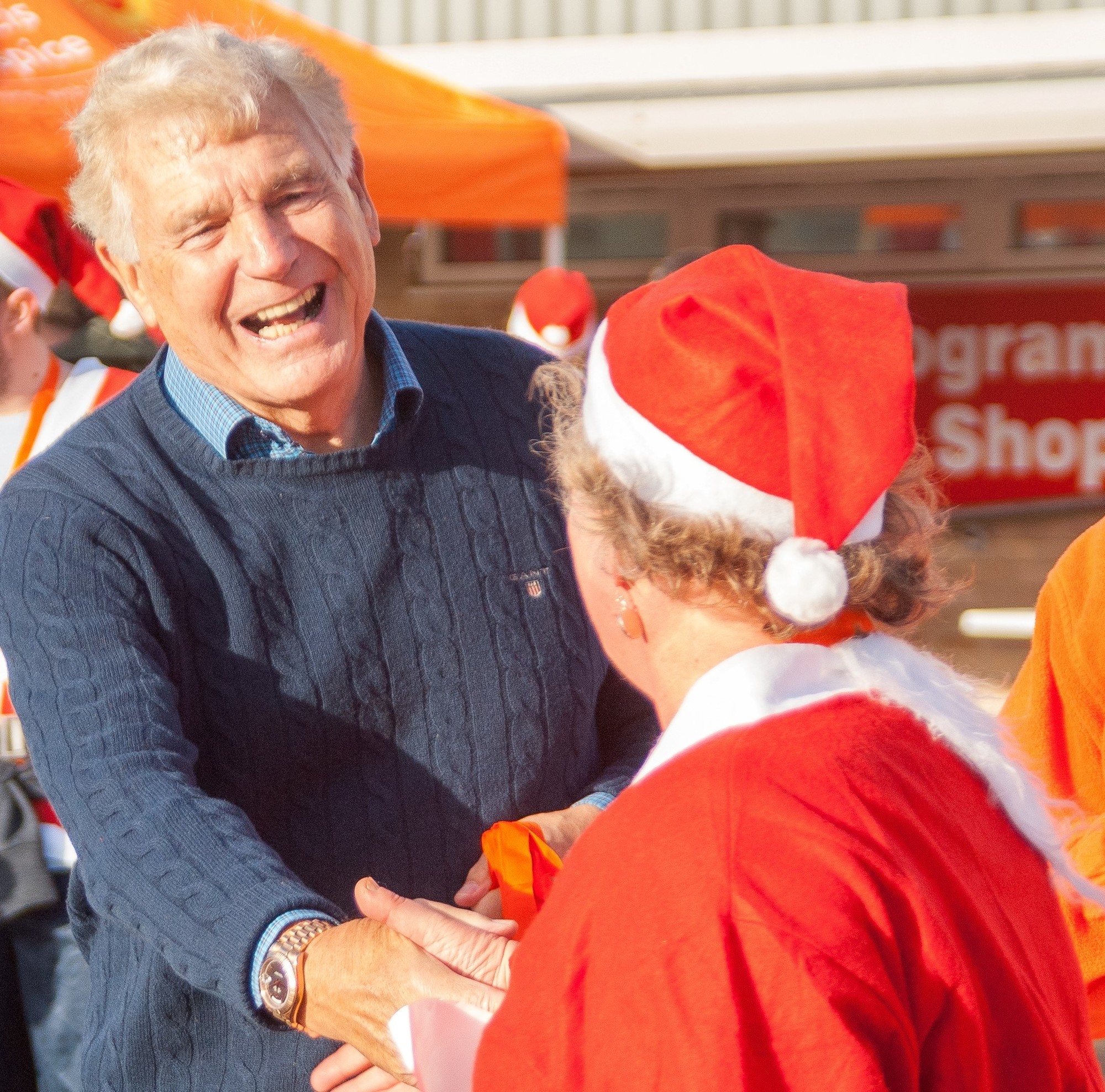 Originally a Barking boy, Sir Trevor has always resided in East London and Essex. When he retired from his role at The FA in 2014, Sir Trevor wanted to do something for people in his local boroughs. The former England and West Ham midfield general is now in his second festive season as a Patron for our charity.

Sir Trevor confessed that many West Ham fans are feeling anxious at the moment. After a promising start to the season, his beloved Hammers have sunk like a stone. Yet not to fear, Sir Trevor is here for some festive cheer! West Ham fans, this is one for you. You can find comfort in the chance to meet the Hammers hero at Frankie's Festive Fun Run on Sunday 8th December at Fairlop Waters.

There will be a chance to have your photo taken with West Ham royalty and grab an autograph — so be sure to bring your claret and blue shirts and memorabilia for Sir Trevor to do the honours. With Santa in his grotto, reindeer, children's characters, amusements, and Christmas market stalls adorned with gifts, jewellery, clothes and toys, it's a day out for the whole family.

Sir Trevor cites the loyalty of the West Ham fans as to what makes his club so special. Be it Boxing Day or New Year's Day in the rain, sleet or snow, the West Ham faithful would be there to cheer him on — no matter where in the country the fixture list took them.

He remembered how the hectic Christmas football schedule often led to bags of goals, crazy results, as well as picking up niggling injuries along the way. Little has changed since then. The festive fixtures of 2020 are just as jam-packed as they were in his playing heydays of the 60s, 70s, and 80s.

"I'd like to think that I controlled myself over Christmas," he said. "I enjoyed my turkey, but Christmas pudding was one I had to bypass," he added (with only a tinge of sadness.)

Sir Trevor admitted that he had to keep an eye on his weight during the festive frolics: "Whereas someone like Bonzo [Billy Bonds] was naturally fit and could eat what he wanted!"

He recalled how it was rather painful watching everyone tuck into their rich pudding and cream, and the endless supply of Christmas nuts and nibbles:

"I would have to keep giving the small table in the living room a wide berth."

With players' diets having changed so much since he retired in 1984, and medical staff monitoring every smidgen of body fat, Sir Trevor admitted that footballers of today wouldn't get away with overindulging like the players of old.

There will also be plenty of warm seasonal street food for everyone to enjoy at Frankie’s Festive Fun Run. Now that Sir Trevor's playing days are long behind him, you can be assured that he won't be holding back this Christmas.

"Saint Francis Hospice is fundamental to everyone who lives in the area. With people living longer, I'm very conscious of the challenge and the need for the Hospice's services. It's the atmosphere, staff and people that make the Hospice what it is" — Sir Trevor Brooking, CBE

You can buy tickets for Frankie’s Festive Fun Run here.