Hilda Witchalls has been living with heart failure for two years. When a community nurse suggested that Saint Francis Hospice could manage her discomfort and breathlessness, just the word 'Hospice' was enough to fill Hilda with dread. 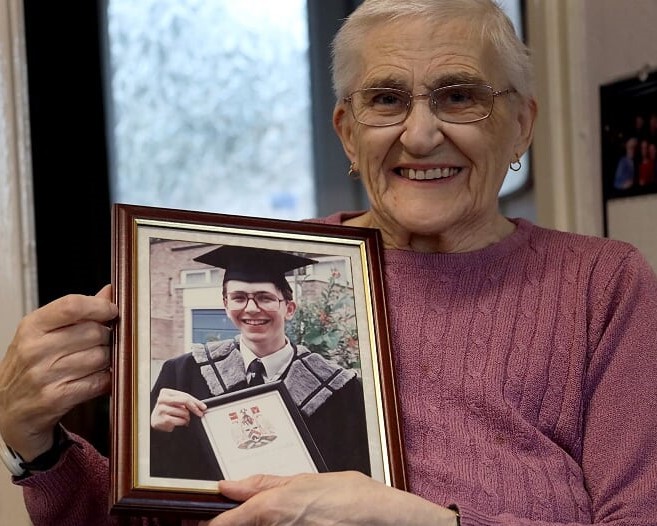 "Please don't send me to the Hospice to die," she would say.

After a career working in hospitals and among children living with disabilities, Hilda feels that she should have known better. She's one of the 33.5% of people who we care for and discharge once they are pain-free and comfortable. Our Hospice being a place where people solely go to die is a myth that we're eager to banish. We've had the pleasure of Hilda at our Hospice six times.

"It's a little holiday for me," Hilda revealed. "I know that I can go home afterwards. When the discomfort comes back, I ask the Hospice to help me again, and I get a bed looking out to the beautiful gardens."

While staying at our Hospice, Hilda works on her book that's been 22 years in the making. Shortly after the birth of her son in 1974, Hilda knew something wasn't quite right with one of his legs.

A doctor dismissed Hilda as a "fussy mother" before she fought for more answers. A consultant was equally dismissive when he starkly labelled Peter a "vegetable" and suggested she put in him in a care home and leave him there.

Peter lived with an arteriovenous malformation — an abnormal connection between his arteries and veins — since birth. Peter had to undergo several amputations on his right leg. As his leg became shorter, he went on to gain a first-class honours degree in astrophysics with an IQ of 170.

"Vegetable? No way!" Hilda declared. "He travelled the world visiting observatories while studying for a PhD in astronomy and cosmology — all on one leg."

Shortly before Peter was due an amputation of his entire leg and pelvis, he asked his mum:

"That broke my heart," Hilda recalled. "Of course I do," I told him. "I now know that he was asking for my permission to go."

In January 1998, Peter passed away the night before he was due to have his operation. He was 23. Hilda didn't believe that her son would even reach his teens. Her book is about how to cope with trauma and grief.

"Lots of people don't know who to turn to, so they keep it all inside," Hilda said. "Grief is like trekking through a desert. There are oases, but not everyone sees them."

Now 82 years old and three-quarters of the way through her book, Hilda has promised that the final chapter will be about our Hospice.

"It's a marvellous place," she beamed.

You can help care for people just like Hilda by sponsoring one of our nurses — for as little as £3 a month. That's less than the price of a cup of coffee, glass of wine, or pint of beer. You can find out more about how you can help here.