Henry O'Keefe loved his nanny and grandad. He was just six years old when they were both diagnosed with cancer in 2016 — only four weeks apart. 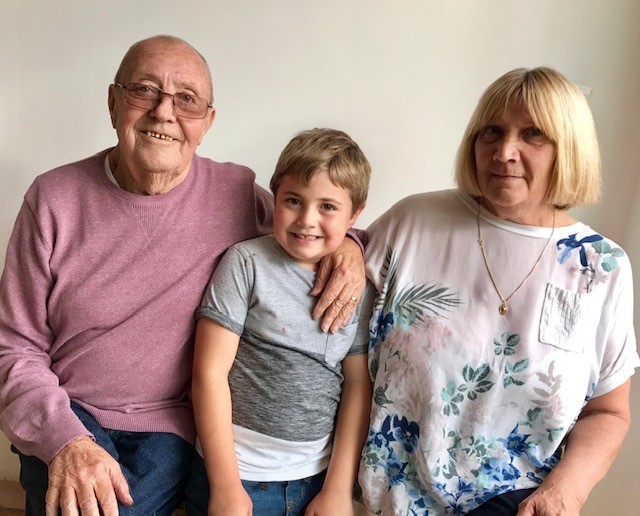 In 2019, Nanny Maureen became an inpatient at Saint Francis Hospice after a long battle with bowel cancer.

“Maureen remained so strong throughout her treatment” recalled her daughter-in-law, Frances.

As Maureen entered the final week of her life, Frances had a big decision to make. As Frances pondered what she would tell her eight-year-old son, she turned to our nurses for advice.

"I had to be brutally honest with Henry and ask him what he wanted," she said.

"It was a shock," said Henry. "I wanted to know what was happening so that I could make the most of the time I had left with Nanny."

Henry and his cousins would visit their nan, and they'd play PlayStation games and watch films in our family hub. One day, Henry brought in a large marble for his nan. He wrote a letter saying how much he loved her, and that she could think of him whenever she looked at it. Maureen, unresponsive for days, woke up, reached out for the marble, and mouthed "I love you" to her grandson.

He made sure he got one last hug in:

"I gave her a cuddle before and I had to say goodbye forever."

Maureen was just 67 years old when she passed away peacefully at our Hospice, leaving Tony — her husband of 40 years. Grandad Tony was living with terminal lung cancer, but wasn't facing his illness alone, as Frances remembers:

"Tony loved his home and wanted to be cared for there. The Hospice at Home nurses didn't just look after him, but the whole family as well. We can't thank Saint Francis Hospice enough. The incredible thing about the Hospice's care is that we could be their family again, rather than their carers."

Tony passed away with our nurses and his family around him four months after Maureen. He was 76.

Henry admitted that being at school became difficult after the loss of both grandparents. "I feel that everything is changing," he said. "If I hadn't said goodbye to Nanny and Grandad properly, then I'd never have forgiven myself."

Henry has been busy fundraising for us and has collected over £1,000. We recently treated him to a day out at West Ham's training ground where he met the players. He's even won a citizenship award at school for his charity work.

"I was quite surprised as I never win anything!" he said. "Grandad gave me £10 for winning the award. He also wrote a letter to me, and I’ve put it in a frame for my bedroom wall. Nanny and Grandad used to look after me and tell me stories. I want to raise money for the Hospice because they looked after them. Being at the Hospice made me feel happy, but I feel sorry for the patients."

"Henry's not going to stop fundraising," said a proud Frances. "I know that one hour of Hospice at Home care costs £54 and a day of care on the ward costs £606, so we want to make up for all the hours we've had."

Tony and Maureen are now together again at a cemetery in East London.