When it comes to what the Great British public have learnt about themselves during the coronavirus pandemic, Barry Hearn cites two things. 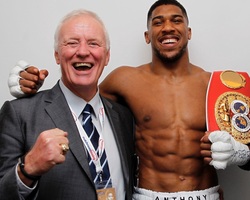 "We've found resilience in ourselves that we thought we never had," said the Saint Francis Hospice Patron and legendary sports promoter.

"We've also discovered that we took many things for granted, and didn't appreciate them until they were taken away. Complacency is a sin that creeps into a lot of people's lives."

Barry admitted that our Hospice could easily be a place that wouldn't be fully appreciated unless it was confined to the history books.

"Let's not take that chance," he appealed. "Look after you and your family first, then your community — and a big part of that alliance is our Hospice. Our care touches the lives of so many people, but it doesn't exist by luck. We're not the beneficiary of a massive amount of government money."

That amount of state funding is only 23% of our Hospice's total running costs. After that, we need to find £23,000 a day to survive — a challenge that's become even more significant since social distancing gripped the nation.

Despite the monotony of the lockdown and a recent heart attack, Barry is still beaming with optimism — a trait he developed while growing up in London's East End — washing cars and picking vegetables as he tried to make a name for himself in this world.

"This wasn't a big heart attack," he said humbly. "It was just an operation with a few stents thrown in. My other heart attack, in 2002: that was proper. This one? It wasn't life or death. It's insignificant when you think what's happening around the globe. I'm OK."

Barry admitted that he even felt a little ashamed to be — as he thought — an extra burden on our NHS.

"I felt embarrassed to be there, yet the NHS was brilliant — as always."

He revealed that the thought of our Hospice not being there to ease the strain on doctors and nurses, is what's motivating him to appeal to our supporters.

"Please don't forget our Hospice's nurses," he said. "The less they are funded, the more pressure it puts on our NHS."

From a big Anthony Joshua fight in London — to darts, gymnastics, fishing and World Championship snooker — Barry has had to cancel over 600 events.

In a rallying call, Barry pleaded for everyone not to give up.

"That's not an option," he said. "The spirit of this country has always been to battle through. There's character among us that got us through these challenges before, and we'll do it again. Hopefully, when life goes back to normal, we'll be more appreciative of what life has given us."

You can do your bit in ensuring our Hospice will always be there by supporting our nurses for as little as £3 month.